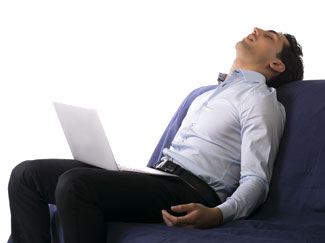 Affected people often have periods of sleepiness every 3 – 4 hours during the day. Usually a short nap is required to overcome this sleepiness and can range from just a few minutes to over an hour if lying down. People may not remember what occurred during these drowsy times and often do not realize the length of the drowsiness period. These sleepiness periods occur rapidly and can happen even when fully engaged in an activity.

Many affected people also suffer from cataplexy, which is the abrupt loss of muscle tone or strength, resulting in an inability to move for a short period. Cataplexy occurs during wakefulness and can be triggered by a heavy meal, stress or a sudden emotion, such as anger or, more commonly, laughter. Cataplectic attacks can affect just the face or they can weaken the whole body, lasting from less than 30 seconds to several minutes.

Other symptoms of narcolepsy can include microsleep episodes, atonia, hypnagogic hallucinations and periodic limb movement disorder. Microsleep episodes are when a person is on autopilot and they continue to behave normally but without conscious awareness. Atonia is a sense of paralysis in the transition between awake and asleep and can last up to 20 minutes, where a person is conscious but cannot speak or move. Hypnagogic hallucinations are dreamlike states between waking and sleeping. These hallucinations can be visual, auditory or even touchable, where a person feels like someone is touching or even lifting them. Periodic limb movement disorder (PMLD) is when the leg muscles involuntarily contract during sleep.

The symptoms of narcolepsy can increase the risk for accidents, such as driving accidents, and can affect mental functioning, leading to problems with memory, thinking and attention. Affected individuals often also have psychological, emotional and social difficulties, including a higher risk of depression, and an increased risk of obesity.